Viruses, bacteria, fungi are some of the many categories of pathogens that can be spread from plant to plant via insects. Some of the more common pathogens in Wisconsin are described below.

Aster yellows is a disease caused by the aster yellows phytoplasma (AYp), which is a small prokaryote that is taxonomically placed in the provisional genus, Candidatus. The AYp is obligately associated with its plant and insect hosts and has not been successfully cultured in the laboratory, which has slowed research progress due to the inability to obtain a pure culture. The AYp has an extensive and diverse host range infecting many common vegetable crops, ornamental plant species, field crops, and several non-crop wild host species. The symptoms caused by AYp are variable, but the most common disease phenotypes include vein clearing, chlorosis, stunting, twisting and proliferation of stems and the development of adventitious roots. These symptoms lead to direct yield and quality losses in many vegetable crops grown in the state. The AYp is vectored primarily by the aster leafhopper or Macrosteles quadrilineatus Forbes, in a persistent and propagative manner. 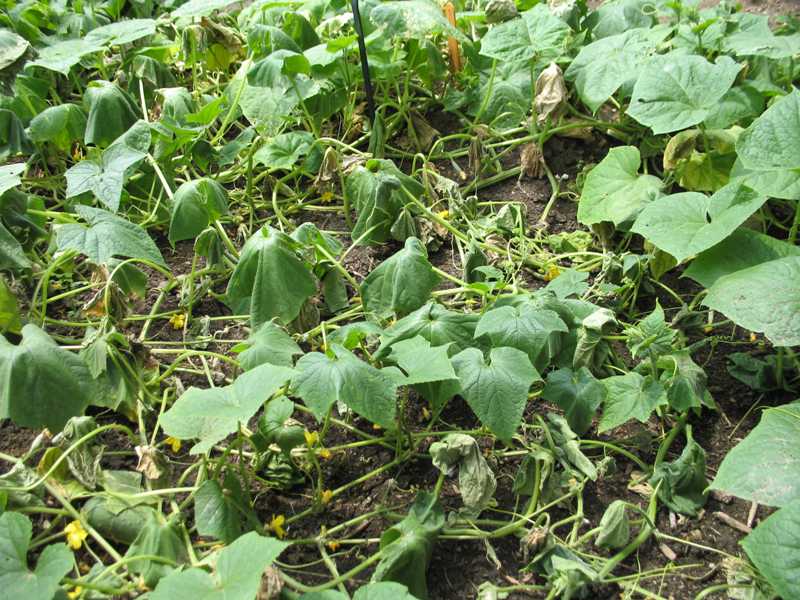 Bacterial wilt is caused by Erwinia tracheiphila bacteria. The bacteria are spread to new plants from contaminated plants by feeding cucumber beetles. Bacteria move through the vascular tissue and disrupt water flow through the infected plant, causing leaves to wilt and eventual plant death. Cucumbers and muskmelon are the crops most susceptible to this disease, though pumpkins and squash may also be affected. 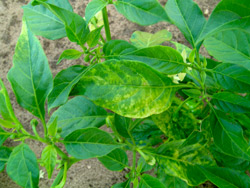 Cucumber mosaic virus (CMV) is a Cucumovirus in the Bromoviridae family. Many plants can become infected. Some of the susceptible vegetable crops include tomato, pepper, cucumber, melons, squash, spinach, celery, and beets. Symptoms are variable but include leaf mosaic, blistering, stunting, and twisted new leaves. CMV is a non-persistent virus transmitted primarily by aphids. 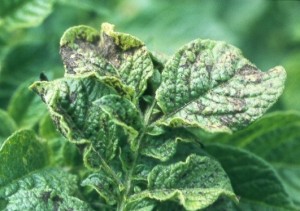 Potato Virus Y (PVY) is a potyvirus that primarily infects plants in the Solenacea family. Present globally, this semi-persistant virus is transmitted by aphids. Once PVY is inside a host plant it replicates by manipulating the potato cells into producing more virus. The effect of this is malformed plant tissues (leaf mottling, streaking, mosaic), reduced production of tubers, and plant tissue damage (necrosis, potato tuber necrotic ringspot disease). PVY infection also reduces storage quality of the tubers by decreasing the percent solids and increasing shrinkage.

PVY is transmitted in potato by multiple aphid species, many of which do not even prefer to feed on potato as a primary host. The virus is transmitted when aphids land on potato and probe the leaf surface with their mouthparts, even if the aphid then decides it is looking for a different host and flies away. Using aphid presence data from the Suction Trap Network, our lab generated a degree day model that reflects the risk of PVY transmission from a combination of all aphid species present in Wisconsin that are known to transmit PVY. In most years, the model suggests that PVY transmission risk is highest from late July through August. Visit the Vegetable Disease and Insect Forecasting Network (VDIFN) web app to see a current risk map for aphid vectors of PVY in Wisconsin or the Upper Midwest.